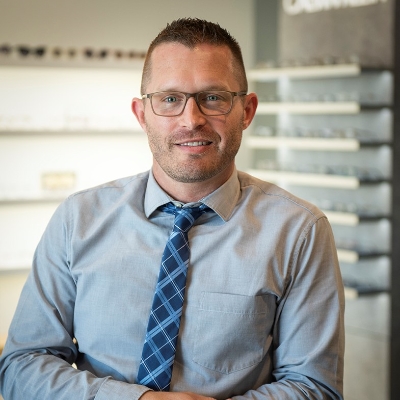 Dr. Reuben Thomas is a native of Miami, OK. He received his Bachelor of Science degree from Oklahoma State University, majoring in Physiology. In May of 2008, he received his Doctorate of Optometry from Northeastern State University College of Optometry in Tahlequah, OK. Following optometry school, Dr. Thomas completed an optometric residency at BVA Advanced Eye Care in Edmond, OK and TLC Laser Eye Center in Oklahoma City where he specialized in ocular disease and refractive surgery management. During his residency, Dr. Thomas attended several advanced training courses in laser surgical procedures, including glaucoma treatment and refractive error correction. In 2012, Dr. Thomas became a diplomat in the American Board of Optometry. He is a member of the American Optometric Association and Oklahoma Association of Optometric Physicians.

Dr. Thomas, his wife, Tana, and their son, Broden, and daughters Siya and Saige live in Edmond.

Schedule An Appointment
Schedule and appointment online. If it is urgent, please call us.
Contact Us
Use our secure contact form to get in touch.
Review Us On Google
Pay Your Bill Online